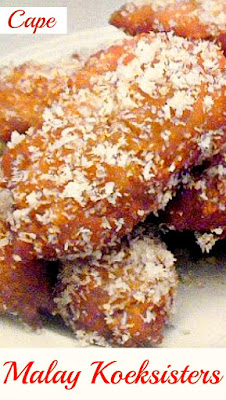 We have Koeksisters which is a sweet, sticky, braided, syrupy sweet treat in South-Africa. I have never made those and only buy from bakeries which I know is great.
Koeksisters seem like a lot of work, and watching myself my family go through a few packets in an hour or two, does not work for me, not after going through all that, therefore when I found a recipe for the Cape Malay Koeksisters, which I think are easier to make, I grabbed the opportunity to make a batch.
These are not drenched right through with syrup as standard Koeksisters are and neither are they braided. It is a lot more spicy, though.
I followed the recipe, but really, it just did not work out the first time, so I made a couple of changes and made a large batch of delicious Cape Malay Koeksisters – my way… Whether this is still acceptable to wear the name, I have no idea.
UPDATE: If you want a simple version of the traditional koeksisters click HERE
Here is how I made them:

(makes about 40 – 50)
3 1/2 cups Flour
1 cup Self-Raising Flour
1 1/2 cup Sugar
1 t Salt
2 t Ground Ginger
1 t Ground Cinnamon
2 t Ground Anise
1 t Cardemom, husks removed and grounded
2 t Tangerine Peel, finely grated
3/4 cup Sunflower Oil
1 Egg
1 1/2 cups Milk
1 1/2 cups Warm Water
1 TB Active Dry Yeast
1 t Sugar
Oil for deep-fry
2 1/4 cups Sugar
1 1/2 cups Water
1 Cinnamon stick
2 Cardamom Pods, husks removed and grounded
2 cups Coconut
1.) Place the Flour, Self-Raising Flour, Sugar, Salt, Ginger, Cinnamon, Anise, Cardemom and the grated Tangerine Peel in a large bowl – mix to combine – add the Oil, rub into the dry ingredients until crumbly.
2.) Mix the Milk and Water – divide into two smaller bowls – add the Yeast and Sugar to the one bowl and stir until dissolved – add the Egg to the other bowl, with the remaining Milk/Water mixture – beat well.
3.) Add first, the Milk/Water/Yeast to the Flour mixture, stir – add the Milk/Water/Egg also to the Flour mixture – mix until you have a soft dough – cover and leave 2 hours to rise {double in size}.
4.) Roll out the dough {on a floured base} to an approximate 5 centimeters {2 inch} thickness – cut into small squares – 2 1/2 centimeters {1 inch} – cover and leave to rise another 30 minutes.
5.) Boil the Sugar, Water, Cinnamon stick and Cardemom together until the Sugar has dissolved – this syrup must be kept warm all the time {not boiling, low heat – only to keep warm}.
6.) Heat the Oil for deep-fry to a medium heat – place a few pieces of dough in the Oil and fry 3 – 4 minutes until golden and cooked through – drain on paper towel and then dunk into the hot syrup for 30 seconds, turning and making sure the whole koeksister is covered, and some of the syrup has been absorbed.
7.) Finally, roll into the Coconut and place on a cooling rack to cool completely.
LINDA
Previous Post: « I’m NUTS About You
Next Post: Pasta with Meatballs in Tomato Sauce »