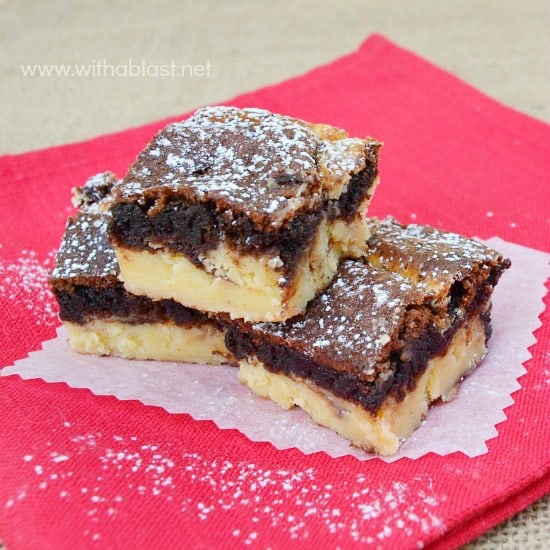 These Cinnamon Cheesecake Brownies are seriously one of the most delicious combinations ever.

The Brownie layer is gooey and very chocolatey ! And the Cheesecake layer has just a hint of Cinnamon to it, but enough to make your taste glands go .. aah,,,yum ! 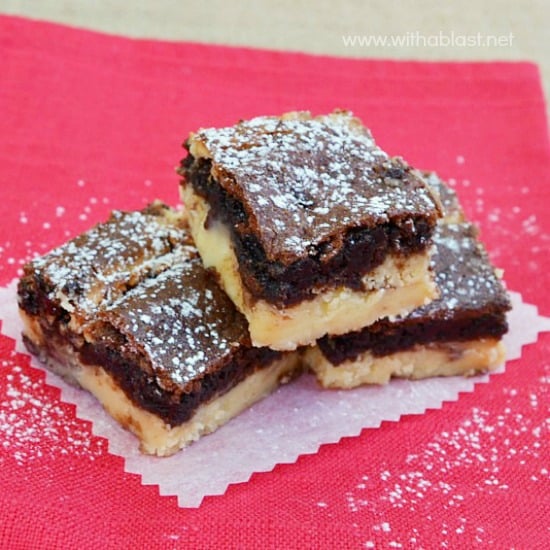 This sweet treat actually starts off the upside down way – almost like an upside down Brownie, if you know what I mean?

The Brownie layer is made first, baked just a few minutes to firm it up very slightly.

Then topped with the Cheesecake layer and baked again. The end result is this delicious, upside down dessert.

My favorite part is anywhere between the very top, which is a little crusty, and the creamy Cinnamon Cheesecake layer on the bottom. 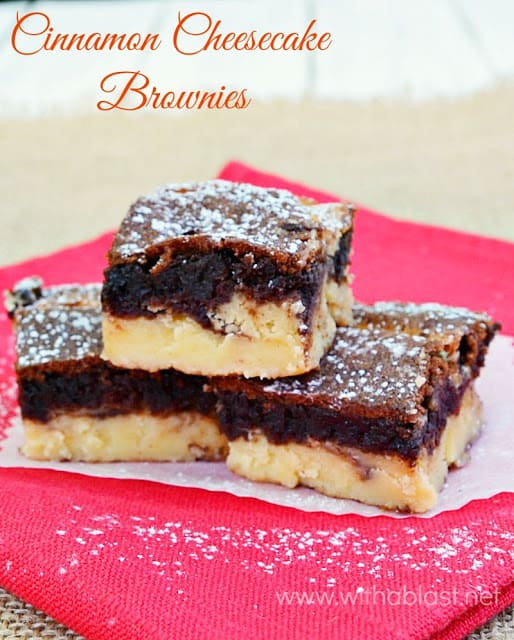 Not to say the Brownie layer is not as delicious ! It certainly is,,, I am merely trying to describe the different textures and degree of gooey-ness mixed in with the creamy Cheesecake.

The two layers do however run a little through each other, but not much. You might think the baked end result is a total failure (as I did the first time), but it does sort of push up on the sides of the oven dish, with a sunken center.

The top is also not even (see the different photos) – all this is normal. Let it cool, chill, slice and you won’t even worry about how it looked when it first came out of the oven.

I can only offer my opinion as to why the Brownie rises to the top. And that is because it is not a heavy (as in a lots of Flour) Brownie mixture.

By running a knife a couple of times through the Cream Cheese and slightly through the Brownie batter, it opens up and the lighter batter rises through and up.

Dust with Icing Sugar (if using), slice into squares and serve. Keep any leftovers in a sealed container in the refrigerator.

These are so yummy! We featured them at The Project Stash! Stop by and get your featured button! We can't wait to see what you link up this week! :)

These sound amazing! Thanks for sharing it with us!

You always have such decadent desserts! I love to pair cinnamon with chocolate. Thank you for sharing, Linda.

Cinnamon adds such a lovely flavour to chocolate! Love these wonderful Cinnamon Cheesecake Brownies, Linda! Thank you for sharing them with us at the Hearth and Soul hop. Pinned and will tweet!

Oh wow, could you get any more delicious ingredients in this? Cheesecake and brownie with a cinnamon twist? You certainly have my attention!!

Thanks for linking up to Marvelous Monday on Smart Party Planning.