UPDATE: Also read the Comments below which might be helpful as well 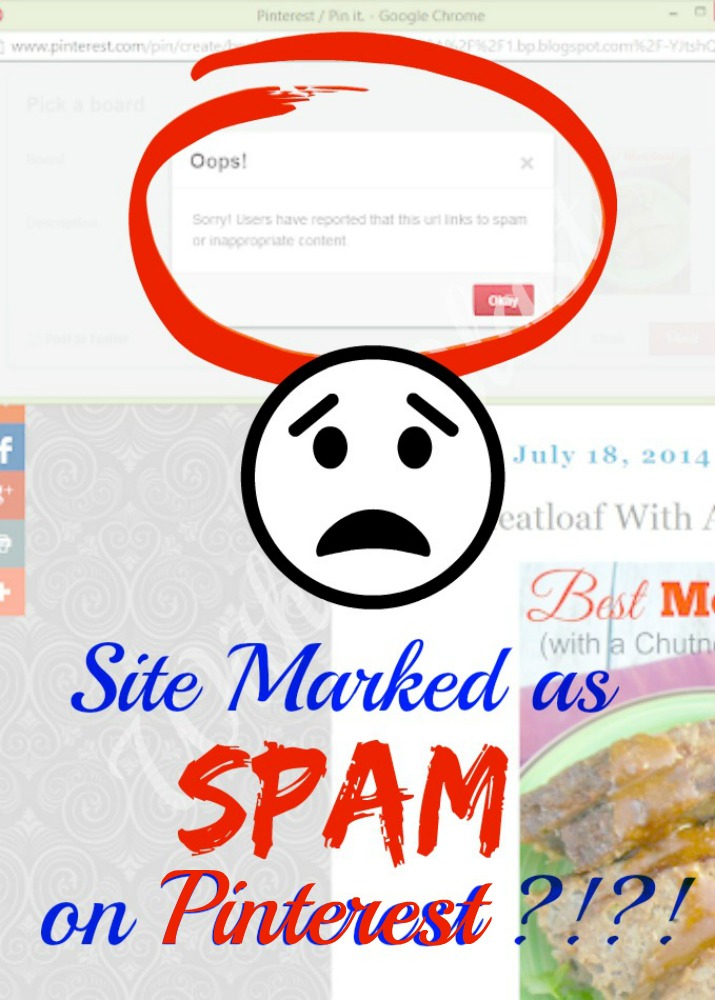 First of all, I hope you are reading this post, Site Marked as Spam on Pinterest , either out of curiosity or to pin for future reference, which you hopefully would never need.

We all love Pinterest, there is no denying that. I get most of my inspiration from there, whether I am looking for a specific recipe, trends at the moment, or to get some advice regarding a paint technique.

It is all there, with the click of the button, you literally have the world at your fingers.

Pinterest has also been my #1 traffic referrer as in forever.

Unfortunately, it also only takes a click (or maybe two) to flag a site as spam.  With A Blast has been verified, rich pins and the whole works.

So then, why did readers/ pinners start to see this all of a sudden a Saturday or two ago ? Yes, below is a screenshot of what you might have seen if you tried to pin ANY of my posts on With A Blast. 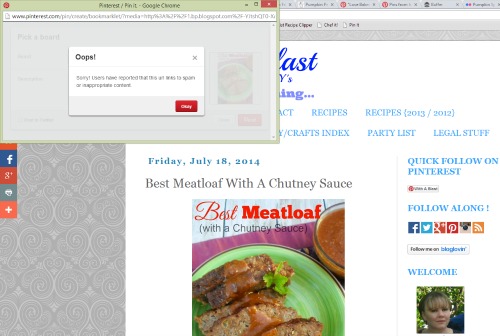 Screenshot received with thanks from Jamie at Love Bakes Good Cakes

A little blurry but clear enough :  “Oops !   Sorry ! Users have reported that this url leads to spam or inappropriate content”

You click “Okay” and the pin box disappears. That’s it, you can not pin – Pinterest won’t let you.  If you were on Pinterest and clicked on a pin from a site marked as Spam, you would get more or less the same message and also no access to the site.

Of course I was furious at first – furious is not even a strong enough word, but it will have to do in this post.

And upon a quick investigation, I found that it was not only a certain pin that was affected and marked as spam – it was my blog in general ! Every single pin with my URL address …

Traffic ceased almost immediately !  Can you imagine all your traffic from Pinterest comes to a dead stop ? Not a nice feeling at all, that I can promise you.

Fortunately I do not blog for an income, but purely because I enjoy it.  However, many, many bloggers depend on any kind of traffic and to lose +/- 5 days of traffic from your #1 or even #3 traffic referrer, can and will do a lot of harm.

Not only did I not get traffic from Pinterest for 5 days, the thing which hit me most was that it was there.  Out in the world for all to see (and probably believe!) that With A Blast is a spammy site.

Which might have inappropriate content or nudity – that was the horror for me. Never mind that pins were also immediately stripped from the rich pin mark ups.

How did this then happen ? After numerous e-mails to the help center at Pinterest, I finally received a reply after 5 days.

Verbatim ” I’m sorry about that! It looks like your account your website was blocked because some of your Pins were reported as spam. I reviewed and removed your website from our blacklist. To avoid this in the future I recommend not Pinning the same image or unrelated content to multiple boards. This is often viewed as spammy behavior. “

I am still not quite sure how or why this happened as my pinning has actually become less over the past couple of weeks. More spaced throughout the day and all, due to the fact that I simply can not use my arms all that much anymore.

BUT, I do however contribute to a bunch of group boards – to which I try my very best to comply to all the rules of the specific boards. I also only use ONE image – specifically edited as a “pin image” for most of my own pinning from my blog.

Now, after Pinterest sent me their reply this is what I am still pondering about :

This post is running much longer than I intended to, but it seems I am left with more questions than answers ! And unfortunately I can only come up with one answer as to why. ONE person flagged With A Blast – yes, that is all it takes to land on the blacklist apparently.

I do understand that Pinterest deals with millions of users, many of which are in fact spammers, as we all well know by now and Pinterest’s first priority is to protect the real, legitimate users.

But, if we can have a more clearly written list of rules to adhere to, that would be a step I hope Pinterest would consider – maybe also not take the word (flag) of one complainant, but maybe 2 or 3 ?

This is not said on the loose.  I have done a lot of reading during the 5 days my site was “down” on Pinterest, and I could not find any definitive rules. Yes, lots of rules, but not specific enough.

I have also found several posts written by fellow bloggers who had been in the same boat at some or other time. Again, most thought it to be a single person flagging their site as spam and not because they acted spammy – reasons ? unknown by most…. Go ahead, Google it, you will find them !

Thoughts ? Insets ? Anything would be welcome, as I am feeling like I need to check each and every pin at least 5 times before hitting the “PIN” button and it is also not nice having to tread on sharp glass which might or might not make you bleed ! 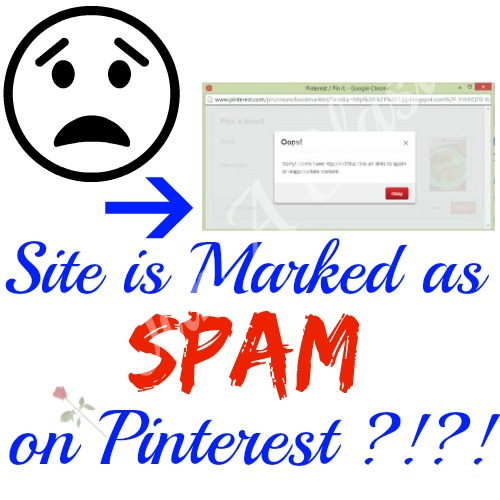 Same Issue On My Business Account I Have not Even A Single Pin On My Account After Few Months Now i am trying to pin its show My Site is blocked because its leads to spam i mailed pinterest Community to unblock my site from spamming list lets see what they do. finger cross....

My site got unblocked after sending in a few requests through the suport portal even though the first time, they replied they were not going to unblock my site.

Hi again, I guess the email from May 2019 isn't valid anymore.

Thanks for contacting us about Pinterest. We've retired the email address you used, and our team won't be able to answer your request. To get support, please submit your request again using the form in our Help Center. (https://help.pinterest.com/contact).

We apologize for the inconvenience, and look forward to hearing from you again.

Thanks for email suggestion, I just used it to send email to them.

I've been trying for last 10 days or so but have yet to get reply.

Hi guys did Any one resolve this issue i try to contact them several time but keep saying same thing. but i never spam the pint rest