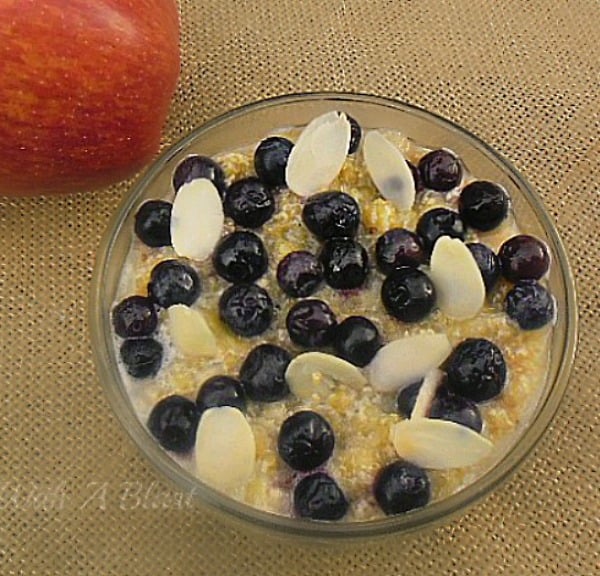 After my surgery a few weeks ago, I did not eat anything for two days. I slept a lot and when I was awake the last thing on my mind was food. One morning I woke up starving ! And this Cinnamon Apple Quinoa was the first thing I wanted.

Really does not bother me, I will have the Cinnamon Apple Quinoa everyday. It is deliciously creamy and is even better without the Blueberry topping.

Hubby and my son would also have a bowl (now and then), but seeing as they are more of the Oatmeal and Coco-Pops fans – not saying who likes which ! – I normally make single servings for myself, which is not 1/4 of the recipe (at least half the recipe for me thank you!)

1.) Cook the Quinoa as per the instructions on the packet until just done – drain and set aside.
2.) Heat the Milk, Honey, Vanilla and Cinnamon until boiling point – add Quinoa and Apple – cook a further 5 minutes until creamy over medium heat.

Spoon into serving bowls, top with Blueberries and Almonds (if using) – Serve immediately.

What a great fall breakfast!

Thanks for linking up with the Caffeinated Crafters!!

I love the idea of using quinoa (and all of its protein!) for breakfast! Pinned and tweeted...can't wait to try this version! :)