Open Up The Kitchen Corner Cabinet 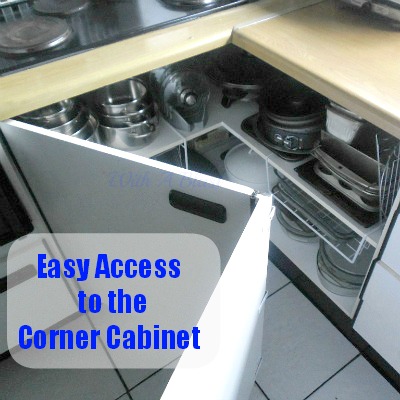 We are busy with the lounge, which I keep on telling you, is almost done! But we shifted to the kitchen for a small project … or two ! I think most of us, at some or other time, are faced with the corner cabinet situation.

You know the one, the corner where two cabinets come together and somehow you lose space. Or can not reach/see far enough into one of them. Well, I had both problems – lost space as well as out of reach.

This has been a thorn in my side for years and now it is sorted. Aanndd it only took a couple of hours. Right, this is a photo heavy post so, I will try to keep the chatter to a minimum. 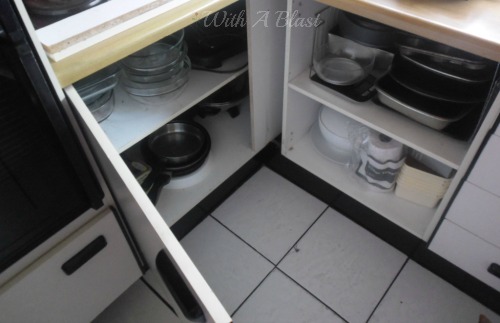 The BEFORE – we have already removed the door on the cabinet to the right as well as the plank closing the gap between the two cabinets. (Never even knew there was a gap..)

As they say – X marks the spot/s. The items are right in the back and not easy to remove. Actually, just about everything was hard to reach. 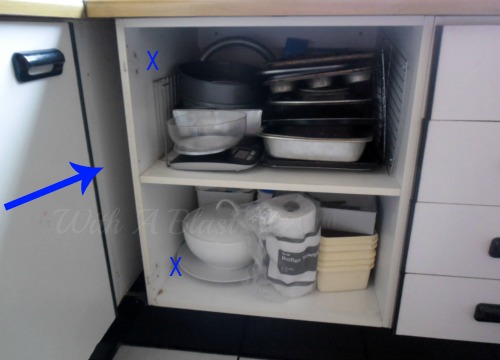 The gap … (which I had never noticed before !) … we removed the front plank 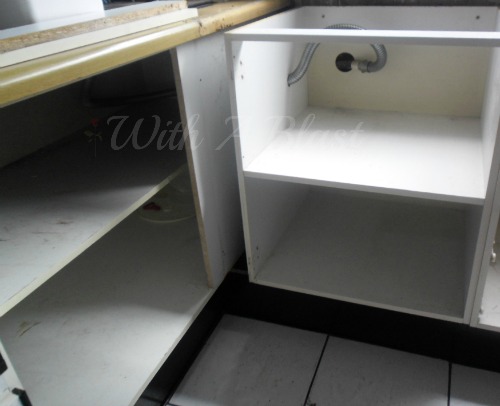 The door on the right has been removed and the cutting down has started – both the side walls had been removed. (See next pic) 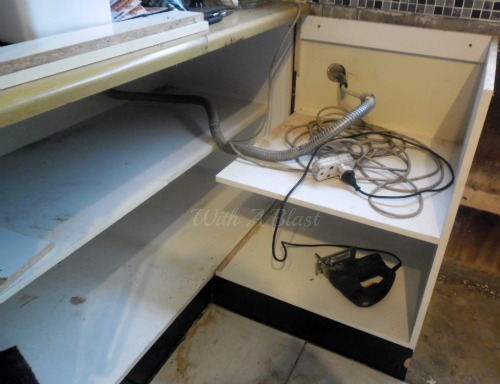 A small plank was inserted to the bottom shelf and the two cabinets are now joined there. Same was done to the upper shelf. My hubby also shifted, temporarily, the drawers cabinet to push the right cabinet closer to the one on the left – he had to remove the counter top.

To stabilize the cabinets (because of the removal of the side walls) we fixed some planks (stretching from one to the other cabinet) underneath the counter and the shelf, which is out of sight, but keeps everything sturdy. 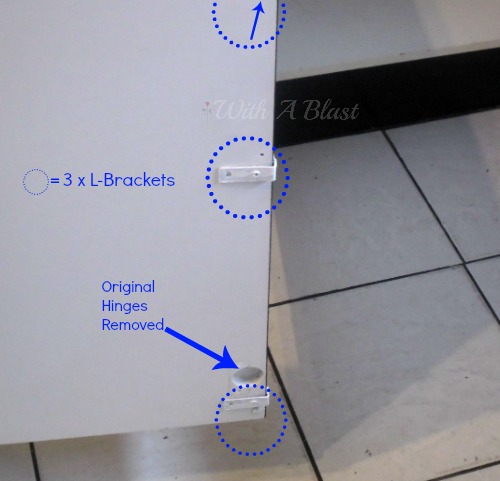 This is the crazy simple bit! We joined the two doors with 3 L-brackets to form one big L-shaped cabinet door. You can see where the original door hinges were and has now been removed. 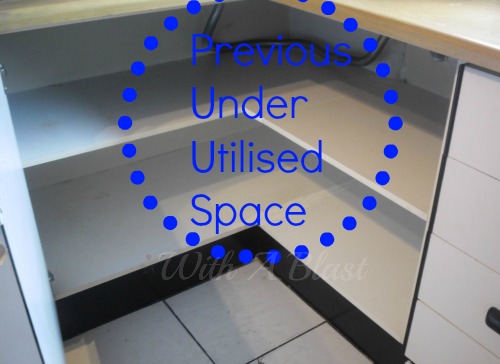 Here is a better pic of both filler planks. 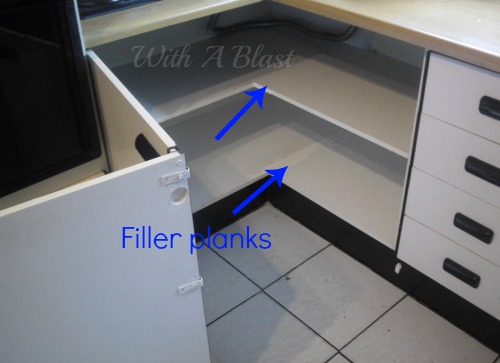 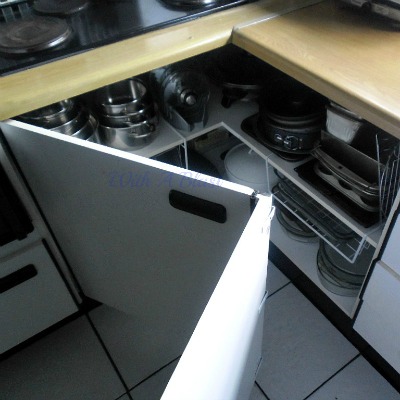 We can now only open the door (which is now one large L-shaped door) from the right side. I kept the door on the left as is, purely to make it seem like a cabinet on it’s own. 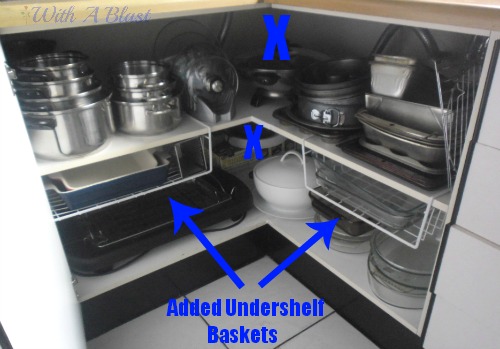 Closed (Note the pull out drawer under the eye level oven on the far left – coming up further down). 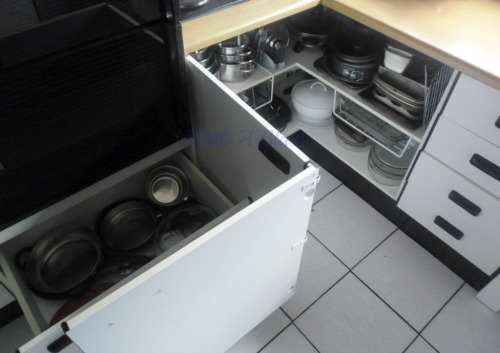 Open and re-packed and I also added some under-shelf baskets.

A lot of changes here – the plastic containers are now in a new place. The pots which have been in the pull out drawer (see below) previously, are now in this cabinet, together with their lids, neatly stored on a dish rack.

The items marked with an X, are not being used often, therefore I do not mind them being in a corner now – still reachable however ! 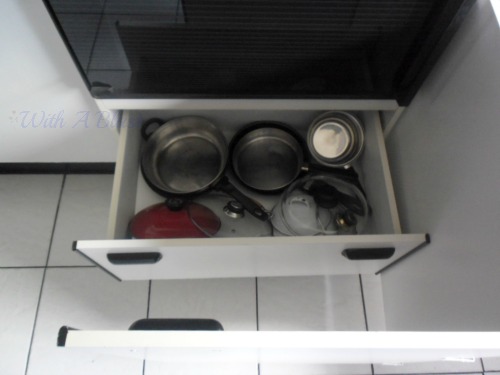 Here we have the pull out drawer – now, filled with pans and their lids – see how the L-shaped door sort of opens up around this drawer?

There we have it – years of frustration and finally easy access after a simple few nips and tucks !

Open Up The Kitchen Corner Cabinet 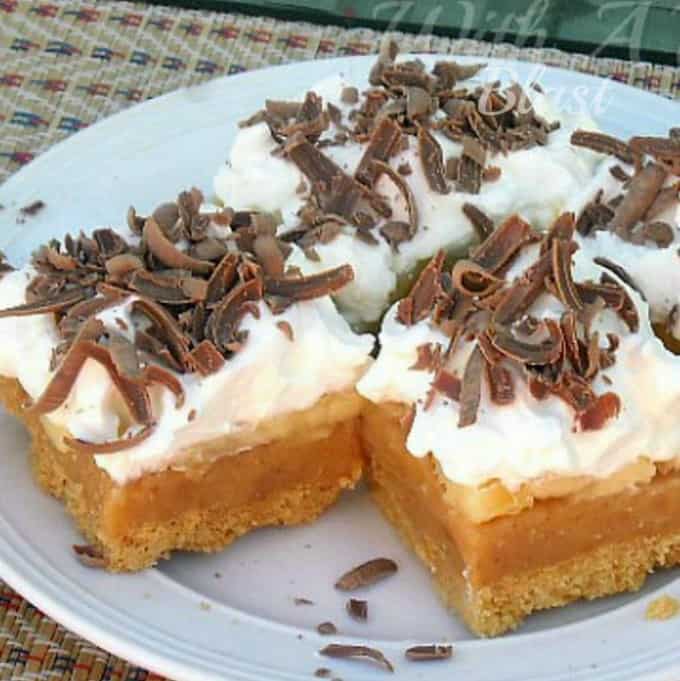 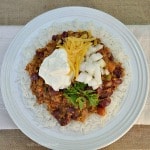 […] Easy Access to the Corner Cabinet from With a Blast […]

[…] Easy Access to the Corner Cabinet from With a Blast […]

OMG Linda, this is fantastic....I want one! Thanks so much for sharing at the Krafty Inspiration Thursday party. I can’t wait to see what you’ve been up to this week.Happy ThursdayMaria @ Krafty Cards etc. http://kraftycardsetc.com/

My New Sliding Spice Rack DIY : With A Blast

[…] it was always a mess to find what I was looking for. After we {finally!} sorted out the Corner Cabinet recently, we had a small gap between the gas stove and the cabinets. Perfect […]